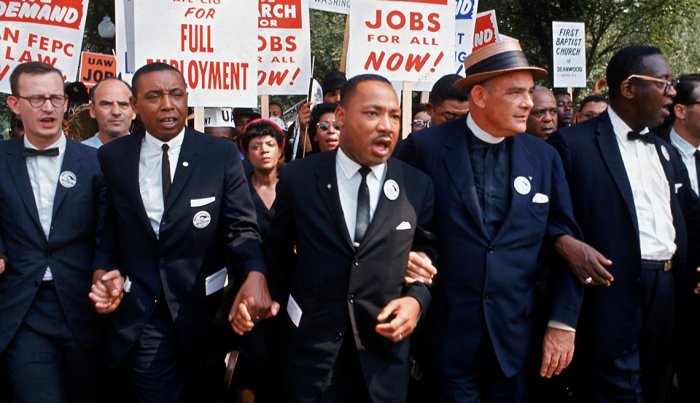 It’s time to hear the “I Have a Dream” speech again. After all, it’s the third Monday in January, the date set aside to celebrate Rev. Dr. Martin Luther King, Jr. And that speech, delivered during the 1963 March on Washington, has come to epitomize everything that most people want to remember about him. Hearing once again that he dreamed of a day when his four children would “not be judged by the color of their skin but by the content of their character,” many applaud anew, admiring him all over again. And that’s precisely why this speech, among the vast quantity of speeches given by Dr. King, is the one repeated over and over again.

It’s a depiction that makes people comfortable. In fact, the repetition of that quote and others equally laudable—from “Let no man pull you so low as to hate him” and “The time is always right to do what is right” to “We must learn to live together as brothers or perish together as fools” and “We must meet the forces of hate with the power of love”—make many feel good about themselves simply for admiring him, proudly patting themselves on the back for their broad-mindedness and magnanimity. And that’s precisely why this one-dimensional portrayal of Dr. King persists.

In an effort to make him more palatable to the masses in death than he ever was in life, all Dr. King’s words and efforts have been reduced to niceties. As a result, the admiration that people feel for him is premised on a partial, highly selective presentation of a man who was actually an outspoken and multifaceted advocate for causes about which he had a passionate sense of justice and for which he was roundly vilified and excoriated in life. So, if we are genuinely to appreciate who he was and all that he accomplished, it’s time to stop whitewashing him. The real Dr. King deserves better.

Not afraid of controversy nor of opposing commonly held views, King was labeled “radical” and “liberal” for taking such stances as championing civil rights and desegregation, advocating on behalf of the poor, standing up for workers’ rights and standing against the Vietnam War. Even on April 4, 1968, the day he was assassinated in Memphis, Tennessee, his sole purpose for being there was to support striking sanitation workers who sought a fair wage and improved working conditions. Indeed, contrary to his current image of a mild-mannered statesman, he was widely perceived as a rabble-rouser, set upon dismantling institutionalized white supremacy along with the norms of racism, materialism, and militarism. For all these reasons, he was extremely unpopular by the time he died.

Yet, he never sought to rehabilitate his image. Instead, he embraced the moniker of “radical” and stood defiantly against all types of oppression, regardless of who the oppressor was. After all, as Dr.King said, “When you are right, you can’t be too radical.” However, upon his death, his persona suddenly became inextricably attached to that embodied by the “I Have a Dream” speech, defining him in simplistic terms that at once made him universally acceptable and effectively erased so much of his legacy.

Educators, we must do better. No one can truly admire or revere that which they don’t fully comprehend. So, it’s time for a new generation to know, understand, and yes, celebrate Dr. King in all his compassion and complexity. He deserves that thorough presentation far beyond his dreams of equity. To persist in reducing him to one aspect of who he was, regardless of the worthiness of that cause, is to make him devoid of the depth and richness that genuinely delineated his character. He was a real man, flawed and fascinating, who made an indelible and dynamic imprint on this country. Let’s honor his whole story.